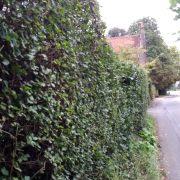 The study is a collaborative effort by partners from the UK, Europe and USA, led by the Professor Kumar under the umbrella of H2020 funded project, iSCAPE: Improving Smart Control of Air Pollution in Europe.

The report findings include that the harmful impact of urban air pollution could be combated by strategically placing low hedges along roads in a built-up city environments. Hedges are often better than trees at soaking up air pollution among tall buildings, as they can trap toxins at exhaust pipe level, so reduce people’s direct exposure to harmful pollutants.

Professor Kumar, who is Chair in Air Quality & Health at the University of Surrey, said future urban planning need to consider designing and implementing more green infrastructure, such as trees and hedges in the built environment to create a healthier urban lifestyle.

Taller trees have more of an impact in reducing air pollution in areas which are more open and are less densely populated by taller buildings.

Professor Kumar concluded: “Under the framework of the iSCAPE project, we are currently performing targeted field investigations to quantify the effects of different types of green barriers along the busy open-road sides. This will help to develop evidence-based guidelines to support future urban planning and the public to make informed choices to “green up” their surrounding environments.”

The BBC’s environment analyst, Roger Harrabin reported on the study on the Corporation’s science news webpages. Practicality Brown have a number of hedging solutions that will work in urban environments – call us on 01753 652022 – or complete our contact form.