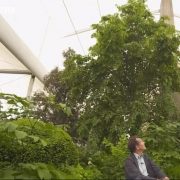 There were very many beautiful gardens at this RHS Chelsea Flower Show and the BBC coverage showcased many of the designs. Monty Don, respected gardener and broadcaster chose his favourite Semi-Mature Trees from this year’s show; all of them spectacular specimens:

The Black Mulberry is a pretty, deciduous tree that is native to South Western Asia. It has very bright green leaves that are heart-shaped and have a serrated looking edge to them.  The bark is gnarly, giving even younger trees an old and historic appearance. As a mature tree, the Black Mulberry has a spreading, rounded shape to it which is almost domed, giving it a wide appeal architecturally.

The fruits emerge throughout the summertime, ripening towards the end of this period to be deep purple in colour and loganberry like in appearance. This tree will tolerate most soil conditions, preferring a lighter well-drained soil.
The Viking Cruises Wellness Garden is a space inspired by the spa and the idea of living well, both of which are intrinsic to the Nordic way of life. The garden is imagined to belong to a single person or couple and is a place in which to relax, feel at home with nature, unwind and recharge from the stresses of life. It is rich with traditional Nordic herbal and culinary plants, many of which are resurgent in Norway and Sweden.

The M&G Garden is a romanticised haven designed for a warm, sunny climate. It expands on a timeless idea that a wall, a tree and a seat can create an intimate and beautiful place of repose. Using Mediterranean flora and raw materials dug directly out of the earth (clay, aggregate and pigment), the space celebrates the expressive language of colour, texture, light and shadow. The stand-out plants in the garden are a pair of beautifully gnarled old pomegranate trees.

Trees take centre stage of Chris Beardshaw’s Morgan Stanley garden for NSPCC with a Betula nigra giving a genuine sense of maturity to the garden, allowing ground level planting to soften the rest of the space.

This tall tree forms a pyramidal shape, often having multiple trunks, with deeply ridged, dark brown bark. Younger trees have a uniquely flaky, orangey-red bark, which peels away from the tree without detaching. Foliage consists of soft, green rhombus-shaped leaves and yellow-green catkins are produced in April.

Designed to raise awareness of the work of the NSPCC, this garden’s design is a metaphor for the emotional transition that takes place in a child as they experience the positive impact of the NSPCC’s work

Tilia europaea is an impressive, fast growing tree which has a broad crown at maturity. It has fragrant yellow flowers that hang in cymes, whilst it’s lush green leaves turn a vivid yellow just before they fall in autumn. This is a tough tree, thriving on most soils, and is frost hardy. It is good for urban areas and is wind resistant.

Celebrating 60 years of the Garfield Weston Foundation, The Weston Garden is a private, enclosed and romantic space that emphasises the simplest and most enduring characteristics of a private garden 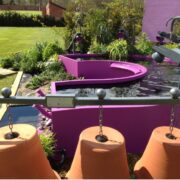 RHS Chelsea Flower Show 2016 "Together We Can" 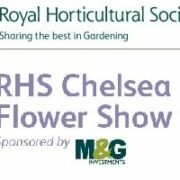 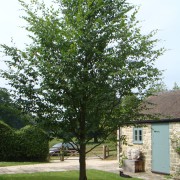 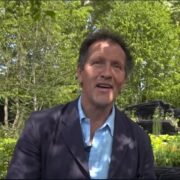 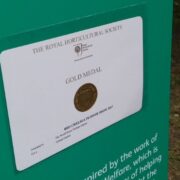 Gold and Silver at Chelsea